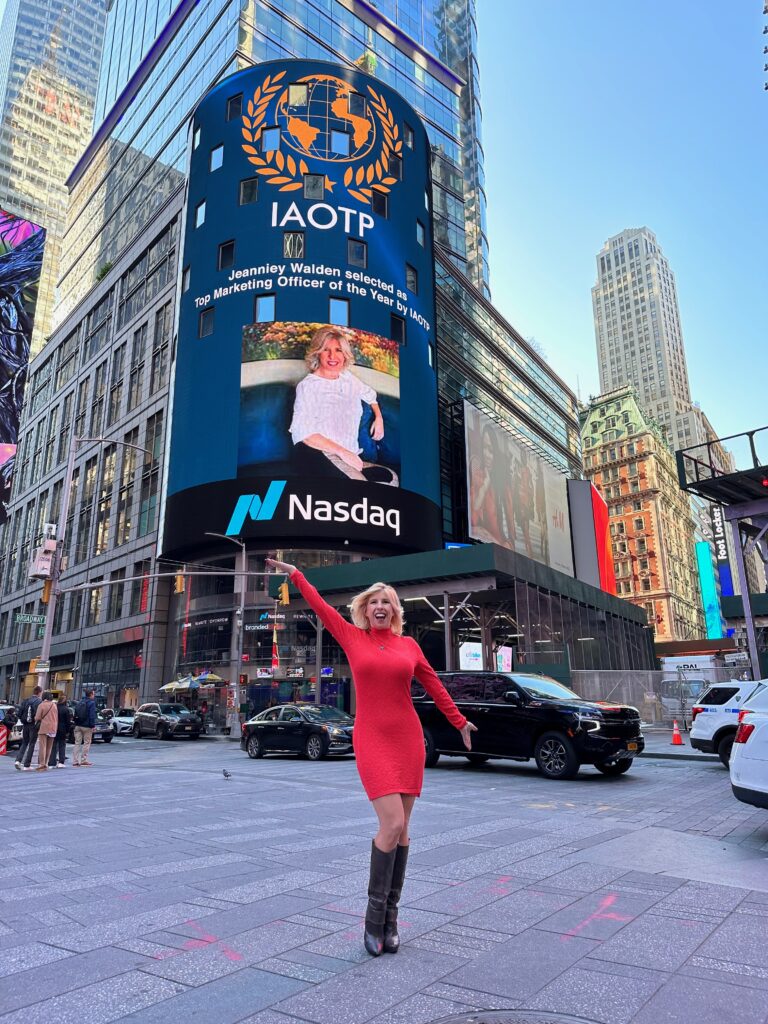 Her first business role was at JCPenny where she quickly advanced from managing call centers to leading the Corporate Customer Relations team where she transformed the company’s email marketing management process.

She credits her early success to her experience as a teacher by focusing on listening and empowering her teams to leverage creative problem solving and collaboration to drive results.

With Digital Marketing still in its infancy, Jeanniey saw the opportunity of email marketing early and moved to work for Echomail. There, she led some of the most groundbreaking and innovative email marketing campaigns including the interactive CK1 billboard/email campaign, the first personalized presidential email fundraising campaign for George Bush and email marketing for American Express.

She then took her skills global when Walden was recruited to oversee the first email marketing division of Grey Direct Worldwide.

At Grey, Walden designed and launched a worldwide email marketing business, establishing skill centers in the UK, Amsterdam, France, Hong Kong, Tokyo , Brazil and the US. Her success in her field and experience with global clients including Oracle and Cendant, led her to be included in the Top 30 under 30 in Ad Age and prompted her first appearances as speaker and panelist at key industry events.

As the world has entered the new digital innovation path and the new technologies emerge, Walden left Grey to pursue new ventures working with a variety of start-ups and pursuing ventures of her own that led to forming a Digital Marketing Agency.

In 2006 Walden’s digital agency was consumed by OgilvyOne and there she took the role of executive director of the Digital Dialogue business, leading the agencies’ efforts in email, mobile and social marketing. She grew a line of business and global team that led the work for the world’s most iconic brands including Kraft, Unilever, SAP, Cisco and IBM.

Walden ran offices in over 10 countries and supported her practice in many more. During her time at Ogilvy, Walden was a featured keynote speaker for many global conferences and contributed to a number of marketing trade publications including MediaPost and  ClickZ.

While at Ogilvy, Walden started the first Email Marketing Trade organization The Email Experience Council. (EEC). The EEC broke new ground in the events space with the design of one of the first community based organizations to leverage peer to peer networking and relationships to support growth. Collectively EEC members drove the elimination of the hyphen in the word email, demonstrating the power of the collective community in driving business change.  The EEC was acquired by the Direct Marketing Association in 2008. During this time Walden co-authored Email Marketing An Hour a Day, a best-seller that was republished in over 15 countries.

After selling the EEC, Walden also left Ogilvy to enter into the new realm of digital innovation at Zinio, the first digital publishing newsstand for magazines and books.

She also led the development of the award-winning VIVMag, the world’s first full interactive digital magazine and Zinio’s sister company.

During her seven year tenure at Zinio and VIVMag as the Global Chief Marketing and Growth Officer, Walden  created partnerships with business icons Apple, Google, Samsung and T-Mobile and brought over 800 of the world’s leading magazines including publishing houses at Hearst, Time, Conde Nast and Meredith Magazines onto the platform.  Zinio was loved and used by over 20 million consumers and was the first newsstand on the iPad in 2008. Google in 2009 and Samsung in 2010.

Walden left Zinio and Vivmag to pursue entrepreneurial opportunities including becoming the interim president for Indieflix, the Netflix for independent films, being a founding partner for RingBlingz, a line of smart jewelry for teens

In 2013, Walden took upon a challenge to transform the business at NOOK by Barnes and Noble. Tasked with migrating the company from a hardware to software model, Walden led all Marketing efforts online and across 867 stores. During her time at Barnes and Noble, Walden founded and led the Women’s Leadership Group for the IMA.

Walden left Barnes and Noble in 2015 to leverage her vast experiences to be the Global Chief Marketing Officer at Mercer, one of the Operating Companies of Marsh and McClennan.

At Mercer, Walden was a global keynote speaker for events including the Internet Marketing Association, QSP in Portugal, IMPACT16, and HRTech. Walden launched the Innovation Lab at Mercer and architected a new brand positioning for the organization. Her work led to many awards and recognition for both her personally and the Company in the areas of the Future of Work, Health and Wellness, Diversity and Inclusion and FinTech. Walden was featured at the World Economic Forum at Davos in 2018.

In 2019 Walden left Mercer and joined DailyPay as the first C-suite female executive outside of the founding team.

A recognized “Women in Business” and an entrepreneur, she has authored multiple books and launched five companies. Most recently, she was named Marketer of the Year by the IAOTP. She also served on the board of Marketing/EDGE

Today, Jeanniey is following her passion by hosting her own TV Show and Podcast called LiftOff with Jeanniey Walden, where she brings on guests who inspire us to make the most of our personal and professional lives.